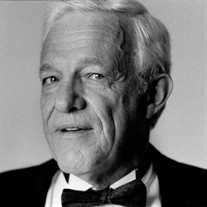 William E. Kettelkamp, of Marion, Iowa, died peacefully at home on October 15, 2021, at the age of 88. He was educated at Cornell College in Mt. Vernon, and the University of Iowa College of Medicine where he earned his MD in 1957. Born to Dr. Enoch Kettelkamp and Elsie Norden Kettelkamp in Monona, Iowa, he learned the importance of hard work, love of family, responsibility to others, and the drive to make a positive contribution. Between completing his studies at Cornell College and the University of Iowa Medical School he was selected to do research at Brookhaven National Laboratory on Long Island. Although very rewarding, this experience helped turn his focus to clinical medicine. Bill’s career spanned 60 years. For the first part he took great pride in his Family Practice, in which he delivered over 1000 babies. It was during this time, Bill married Hope Nieminen, and six of his seven sons were born. They subsequently divorced. Early in the 1970’s he completed a fellowship in Gynecology/Endocrinology at the U of I while he started the Emergency Room at St. Luke’s Hospital practicing there for over 25 years. As an ER director he took care of countless patients and oversaw the development of the Area Ambulance Service and the Flight Care Program in this community and with two other ER doctors started a medical clinic at the base of the mountain in Keystone, Colorado. In 1992 he married Joan Upah and a seventh son was born. Bill cherished Joan and his seven sons and made a profound impact on each one. Time spent with family was a great joy to him. When he retired from ER medicine in 1997, he spent 20 years consulting for Aegon as a part time medical director. Throughout his entire productive career in this community, he fought for the patient. In addition, he was highly respected by his peers for his medical skill and was chosen by them as a leader in many capacities. He was an exceedingly, warm, gentle, and caring doctor always thinking of the patient first. Bill worked hard to keep the cost of medicine affordable when he practiced and worried until the end that everyone should have health care within their reach. Bill had a great sensitivity; he was interested in social justice and early on supported local doctors of color in their fight for racial equality in this area. He travelled with one peer to Detroit, Michigan, to meet Julian Bond and establish solidarity with the civil rights movement. But Bill’s conscientious desire to help others was with him each day. He never turned down someone who asked for help. He was also an artist. He painted many pastorals, genre and still life images. Some, shown at the Cedar Rapids Museum of Art, some in local collections, and he loved reading and writing poetry. Bill is survived by his beloved wife Joan Kettelkamp; cherished sons William (Beth), Robert (Cindy), Peter (Linda), Dr. James (Shellie), Dr. Donald (Dr. Danielle), Dr. Richard (Nikki), and Joseph Kettelkamp; brother Dr. Donald Kettelkamp; 18 grandchildren and nine great grandchildren. We his family know he had a deep religious faith. He always believed that God would take care of us. First Presbyterian Church Cedar Rapids will conduct the funeral on Friday, November 19, 2021, at 11:00 a.m. If you have a story to share, visit murdochfuneralhome.com. In lieu of flowers, please consider a gift to the Community Health Free Clinic of Cedar Rapids or First Presbyterian Church, Cedar Rapids. Photo by Kerry Helvey

William E. Kettelkamp, of Marion, Iowa, died peacefully at home on October 15, 2021, at the age of 88. He was educated at Cornell College in Mt. Vernon, and the University of Iowa College of Medicine where he earned his MD in 1957. Born to... View Obituary & Service Information

The family of William Kettelkamp MD created this Life Tributes page to make it easy to share your memories.

Send flowers to the Kettelkamp family.