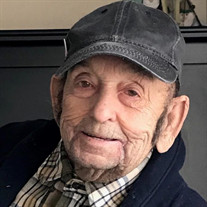 William L. Malone, 91, of Marion, Iowa, passed away on June 21, 2021, at Evergreen Estates in Cedar Rapids, Iowa. There will be no visitation. A graveside service for William will be held at 10:00 a.m. on Thursday, June 24, 2021, at Mt. Calvary Cemetery at 375 32nd Street Drive SE in Cedar Rapids, with military honors provided by the Marion American Legion Post #298 and the United States Marine Corps. Certified Celebrant Casey Hepker will officiate. Murdoch Funeral Home & Cremation Service is assisting the family. William was born on March 21, 1930, in Coffins Grove, Iowa, the son of Edward and Belle (Burgin) Malone. He served honorably in the United States Marine Corps from 1951 to 1953, during the Korean War. On January 29, 1955, William was united in marriage to Ruth Malone in Manchester, Iowa. The family relocated to Marion, where William worked and retired from Farmstead Foods in 1990. William is survived and lovingly remembered by his three sons, Timothy Malone of Davenport, Iowa, William (Darlene) Malone of Surprise, Arizona, and Charles Malone of Cedar Rapids, Iowa; two daughters, Michelle (Jonathon) Bailey of Cedar Rapids, Iowa and Cally Madigan of Davenport, Iowa; four grandchildren, Angela (Kirk) Wilson of Central City, Iowa, Adam Martin of Cedar Rapids, Timothy Madigan of Davenport, Iowa and Tyler Madigan of Chicago, Illinois; one great-granddaughter, Aria Wilson; and one sibling, Vera (Malone) Skeries of Cedar Rapids, Iowa. He was preceded in death by his wife of 55 years, Ruth Malone; his parents, Ed and Belle Malone; and two brothers, Bernard and Jimmy Malone. The family would like to extend a special thanks to Evergreen Estates of Cedar Rapids, Iowa and Hospice of Mercy professionals for their help, kindness and sincere devotion to William. In lieu of flowers, memorials in William’s memory may be directed to the Mercy Foundation for the benefit of Hospice of Mercy.

The family of William L. Malone created this Life Tributes page to make it easy to share your memories.

Send flowers to the Malone family.