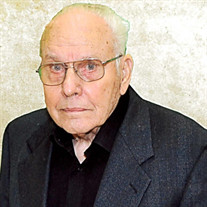 William A. Richards, 97, of Marion, Iowa, passed away on Saturday, February 6, 2021, at Winterset North Care Center in Winterset, Iowa. Family will greet friends from 10 to 11 a.m. on Friday, February 12, 2021, at Murdoch Funeral Home & Cremation Service in Marion. A funeral service will follow at 11 a.m. on Friday at the funeral home, conducted by Pastor Kip Morrow. Burial will take place at Cedar Memorial Park Cemetery in Cedar Rapids, Iowa. All guests are respectfully requested to wear a face mask and practice social distancing. William was born on September 26, 1923, in Sioux City, Iowa, the son of Reed J. and Edna (Brown) Richards. He graduated from Lincoln High School in Webster City, Iowa in 1941. William served honorably in the United States Air Force from 1943 to 1946, during WWII, as a certified air craft welder. On May 4, 1946, he was united in marriage to Naomi Ruth VanAusdall. They moved to Cedar Rapids, Iowa, on June 19, 1948. She preceded him in death on August 14, 1997. William worked for Link Belt and later FMC for 36 years, retiring in 1985. He was a member of the Cedar Rapids First Church of the Nazarene from 1948 to 2008, then Victory in Grace Baptist Church. William was a very faithful man and dedicated to his church. He enjoyed cross word puzzles and loved spending time with his family. William will be greatly missed by all who knew and loved him. William is survived and lovingly remembered by his two sons, Roger Richards of Marion, Iowa, and Bruce Richards of Cedar Rapids; two granddaughters, Julie (Steve) Carlson of League City, Texas, and Tammy (Tim) Lewis of Cedar Rapids; five great-grandchildren, Alisha, Amanda, Stefanie, Spencer, and Luke; brother, Robert (Gerri) Richards of Van Meter, Iowa; and several nieces and nephews. He was preceded in death by his parents, Reed and Edna Richards; and his wife, Naomi Richards.

The family of William A. Richards created this Life Tributes page to make it easy to share your memories.

Send flowers to the Richards family.