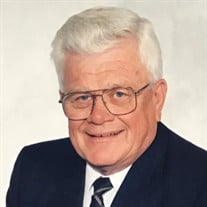 William “Bill” David Wallace, 90, of Manchester, Iowa, passed away due to complications from Covid-19 on Friday, October 9, 2020, at the Good Neighbor Home in Manchester. A private family graveside service will be held on Saturday, October 17, 2020, at Oakland Cemetery in Manchester with Military Honors provided by the United States Air Force and Masonic Honors. A Celebration of Life will be held at a later date. Bohnenkamp-Murdoch Funeral Home & Cremation Service, Manchester, is assisting the family. Bill was born on April 23, 1930, in Detroit, Michigan, the son of Walter “Wally” and Bertha “Birdie” (Gray) Wallace. He graduated from Manchester High School, and attended the University of Iowa. He was a member of the Sigma Alpha Epsilon Fraternity. Bill served in the United States Air Force during the Korean War. In 1957, he married the love of his life Constance “Connie” Joan Burke. Together they had two children Dana and David. Unfortunately their marriage ended in 1968. In 1986, he married Karen Klaus. Bill, along with his brother and father, owned and operated Wallace’s, Inc., a General Motors and John Deere dealership for over 40 years. He also farmed and raised black angus cattle with his son, David. Bill was a proud member of the Masonic Lodge #165 of Manchester, Scottish Rite, El Kahir Shrine, Manchester Lions Club and The Jaycees. His favorite Shrine activity was driving the area children and their families up and back to their appointments at the Shriners Hospital in Minneapolis, spending many hours waiting and getting to know the families. He also loved driving and riding the Shriners fire truck in many parades around N.E Iowa. He served his community quietly, wanting no accolades, and did many good deeds anonymously. Bill loved flying and was one of the earliest private licensed pilots in the Manchester area along with his wife, Connie, who was the first woman in Manchester to be a licensed pilot. He loved to hunt and especially loved his fishing trips to Canada with all his friends. Bill was an adamant Iowa fan, who never missed a chance to watch his beloved Hawkeyes. Bill is survived and lovingly remembered by daughter, Dana Wallace; son, David (Lori) Wallace of Waverly, Iowa; grandchildren, Sarah (Chidi) Ewelike, Burke, Jack, Daniel and Allison Wallace; great-grandsons, Silas and Sawyer Ewelike; and his brother, Larry (Judi) Wallace of Port St Lucie, Florida. Bill was preceded in death by his parents, his first wife Connie and his second wife, Karen. Memorials in Bill’s memory may be directed to the Shriner's Transportation Fund or Masonic Lodge #165 of Manchester Iowa.

William &#8220;Bill&#8221; David Wallace, 90, of Manchester, Iowa, passed away due to complications from Covid-19 on Friday, October 9, 2020, at the Good Neighbor Home in Manchester. A private family graveside service will be held on Saturday,... View Obituary & Service Information

The family of William David Wallace created this Life Tributes page to make it easy to share your memories.

Send flowers to the Wallace family.