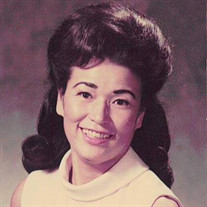 Yoshiko Bush, 89, died Friday, August 6, 2021, at Corridor Crossing Place. Private family services will be held. Burial will be held at a later date at the Great Lakes National Cemetery in Holly, Michigan. Murdoch-Linwood Funeral Home & Cremation Service in Cedar Rapids is assisting the family. Yosh was born January 8, 1932, in Japan. She was united in marriage to Gary Duane Bush in Clinton, Iowa, in June of 1979. Yosh was a textile worker at the Clinton Garment Company for more than 20 years. Yosh was a member of the Violet club in Saginaw, Michigan and raised award-winning violets. She also enjoyed playing bingo and will be remembered for her big smile around her family. Yosh is survived by her children, Irene Enwright of Clinton, Iowa, Billy Enwright of Corvallis, Oregon, and Michael (Joye) Enwright of Coppell, Texas; two grandchildren, Jason (Michelle) Greve and their children, Witten and Keaton Greve of Coralville, Iowa, Shane (Megan) Greve and their children, Isaac and Owen Greve of Solon, Iowa; sister-in-law, Phyllis Hasenkamp of Clinton, Iowa, and her children, Nancy, Mary Jane, Julie and Barbara. Yosh was preceded in death by her parents; and husband, Gary Bush.

The family of Yoshiko Bush created this Life Tributes page to make it easy to share your memories.

Send flowers to the Bush family.