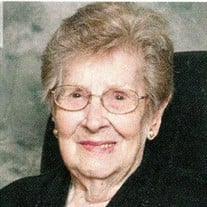 Bernita L. Sills, 98, of Marion, Iowa, passed away on Wednesday, October 6, 2021, at the Dennis & Donna Oldorf Hospice House of Mercy in Hiawatha, Iowa. A visitation and luncheon will be held from 12 to 2 p.m. on Saturday, November 20, 2021, at Marion Methodist Church in Marion. A funeral service will follow at 2 p.m. on Saturday at the church. Burial will take place at a later date at Cedar Memorial Park Cemetery in Cedar Rapids, Iowa. Bernita was born on March 11, 1923, in Marion the daughter of Warren Zier and Lura (Waddington) Stewart. She attended Marion Schools. At 14 years old she saw a young gentleman by the name of Neil Sills and told her best friend, “I will marry that man”. On August 20, 1939, Bernita and Neil were united in marriage in Cedar Rapids. To this union their only son, Donald, was born. They remained married for 42 years, until Neil’s passing. During WWII Bernita worked at Collins Radio making radios. After the war, she returned home to be a homemaker. Bernita and Neil built a home in 1951, that she was proud to live in until her passing. She was a lifelong member of Marion Methodist Church and a volunteer for the Helping Hands Ministry and the Churches of Marion Food Pantry. Bernita was also a member of the Marion American Legion Auxiliary and volunteered with Shriners. She was very independent and loved technology, her computer, and birds. Bernita was cared for by Visiting Angels and was very fond of them. She will be greatly missed by all who knew and loved her. Bernita is survived and lovingly remembered by her daughter-in-law, Denise Sills of St. Charles, Missouri; niece, Heidi (David) Polson of Lake of the Ozarks, Missouri; and two nephews, Steven (Sherri) Schwendemann of Ft. Dodge, Iowa, and Ricky (Claudia) Zier of Apache Junction, Arizona. She was preceded in death by her parents; husband, Neil Sills; son, Donald Sills; sister, Doris (Don) Schwendemann, and two brothers, Basil (Mickey) Zier and Norman Zier. In lieu of flowers, memorials in Bernita’s memory may be made to either the Marion Methodist Church or the Honey-Do Fund at Marion Methodist Church.

Bernita L. Sills, 98, of Marion, Iowa, passed away on Wednesday, October 6, 2021, at the Dennis & Donna Oldorf Hospice House of Mercy in Hiawatha, Iowa. A visitation and luncheon will be held from 12 to 2 p.m. on Saturday, November 20, 2021,... View Obituary & Service Information

The family of Bernita L. Sills created this Life Tributes page to make it easy to share your memories.

Send flowers to the Sills family.