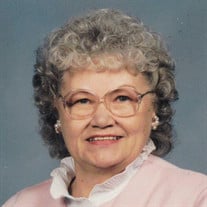 Gloria Mae McCord, passed away on Tuesday, June 22, 2021, at the age of 95. A private family graveside service was held on Friday, June 25, 2021, at Riverside Cemetery in Anamosa, Iowa. Gloria was born on April 27, 1926, in Anamosa, Iowa, the daughter of Charles Grover Arthur and Sofia Elizabeth (Anderson) Arthur. She was born into a large family of 13 brothers and sisters of which she was the last surviving member. Her sisters were Clara, Mildred, Ann, Pauline, Bertha and an unnamed infant sister. Gloria’s brothers were Harlan, Lester, Clifford, Charles, Gene, Max and infant brother, Thomas Leroy who was born in July of 1910 and passed away in August of 1910. She and her husband, Waylon McCord, raised five children. Gloria was a busy homemaker who liked to sew, decorate her home, and together they went bowling, dancing, playing cards, and attending Iowa Football games. She was to the end a determined and spirited woman. Gloria was a woman of faith who trusted in the Lord to guide her life. She had an afternoon ritual of tea and cookies which nobody was to mess with. Gloria will be deeply missed by her family. She was devoted to her children and grandchildren and was always interested in their activities and lives. She lived the last seven years with her daughter and granddaughter, Sharon and Joanna Schanbacher, of Cedar Rapids. She is survived by her daughter, Sharon Schanbacher of Cedar Rapids; sons, John (Amy) McCord of Cedar Rapids and Douglas McCord of Winter Springs, Florida; six grandchildren, Kimberly Stark, Matthew McCord, Bonnie Seely, Joanna Schanbacher, Todd Schanbacher and Leah Nobling; 12 great-grandchildren, Stephanie and Joshua Stark, Mikaela, Noah, Hannah and Jonah Seely, Rose, Jacob and Zoe Schanbacher, and Preston, Braeden and Delaney Nobling; and many nieces and nephews. Gloria was preceded in death by her parents; husband, Waylon McCord, Sr; sons, Waylon “Sonny” McCord, Jr. and Glen McCord; daughter-in-law, Linda McCord; son-in-law, William Schanbacher; and grandson, Jeffrey McCord. Special thanks to Dr. Heidi Dahlem who was Gloria’s doctor for the last seven years and to the staff at Hiawatha Care Center which cared for her for her final two weeks. Cards may be sent to Sharon’s home at 1719 Brookdale Avenue NE, Cedar Rapids, Iowa, 52402.

The family of Gloria Mae McCord created this Life Tributes page to make it easy to share your memories.

Send flowers to the McCord family.