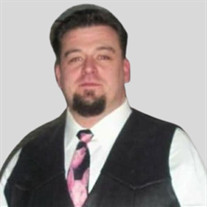 Joseph Harlan Gluba, 41, of Cedar Rapids, Iowa, died Tuesday, September 7, 2021, at his residence. A memorial service will be held at 10 a.m. on Saturday, September 18, 2021, at Trinity Lutheran Church in Cedar Rapids. A Celebration of Life will begin at 2 p.m. on Saturday, September 18, 2021, at Rumors Bar & Grill in Cedar Rapids. Inurnment will take place at a later date at Linwood Cemetery in Cedar Rapids. Murdoch-Linwood Funeral Home & Cremation Service in Cedar Rapids is assisting the family. Joe was born October 21, 1979, along with his lifelong partner-in-crime, twin brother Gabe, to Joe Gluba and Robin Wyatt. After graduating from Cedar Rapids Jefferson High School Class of 1998, where Joe was proud to play varsity football, he entered the workforce at Midland Transporting then Dale Lee Distributing. For the past 15 years he worked at Weyerhaeuser/International Paper. Joe enjoyed riding his Harley Davidson trike and never left a social gathering without making a new friend. He was well-liked and loved by many; but the most important thing in his life was his daughter, Alysanne Kay Gluba (born to Joe and Tricia). The birth of his daughter led to Joe and Alysanne developing a strong relationship with God, which they sanctified together during their dual baptism on May 4, 2019 and their official membership of Trinity Lutheran Church on October 6, 2019. Joe’s favorite pastimes, when not spending one-on-one time with his daughter, were family holidays and trips with Aly, Joe’s brother and nephews, and “Uncle” Frank. He also enjoyed playing cards with his Rumors family. Toward the physical end of his life, Joe would reflect in discussions with his brother about his different mentors: Tom Wyatt, Al Chism, and Marty Looney, who played an important role in the development of Joe’s strong work ethic, one of his many cherished characteristics. Joe is survived by his daughter, Aly Kay; parents, Joe Gluba and Robin Wyatt; brothers, Gabe Gluba and Jeremy Brown; nieces, nephews, many aunts, uncles, and cousins; special “Uncle” Frank; his daughter’s godparents, Mary Phipps and Jackson Jones; and special friends, Bob Schutty and Melissa Lekin. Joe was preceded in death by his son, Joseph Harlan Gluba II; both sets of grandparents; and special “grandparent,” Wayne Murray. Joe wished that his thanks and appreciation be noted to everyone who showed amazing, ongoing love and support to him and Aly Kay. Memorials may be directed to Trinity Lutheran Church.

Joseph Harlan Gluba, 41, of Cedar Rapids, Iowa, died Tuesday, September 7, 2021, at his residence. A memorial service will be held at 10 a.m. on Saturday, September 18, 2021, at Trinity Lutheran Church in Cedar Rapids. A Celebration of Life... View Obituary & Service Information

The family of Joseph Harlan Gluba created this Life Tributes page to make it easy to share your memories.

Send flowers to the Gluba family.