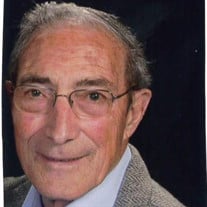 Lewis Scherbaum, 80, passed away Monday, August 10, 2021. Lewis was born in rural Garrison, Iowa, on October 16, 1940, to Alice and Harold Scherbaum. Memorial services and Celebration of Life will be held at 11 a.m. August 28, 2021, at the Toddville Legion Hall, visitation will be from 9:30 to 11 a.m. and military rights will follow the service. Survivors include his wife, Sharon of 57 years; four children, Mark (Marie) Scherbaum of Marion, Iowa, Wayne (Cristin) Scherbaum of Indianapolis, Indiana, Darin (Kari) Scherbaum of Aurora, Missouri, and Marcie (Ron) Brewer of Marion, Iowa; nine grandchildren; four great-grandchildren; his twin sister, Lois Stivers of Springville, Iowa; sister, Betty Curtis of Las Vegas, Nevada; and several nieces and nephews. The family moved to Cedar Rapids in 1950, Lewis graduated from Jefferson high-school, and later worked for Nash-finch company in Muscatine, Iowa. He went into the U.S Army in 1963-1966. In 1964, Lewis married Sharon Nolan in Muscatine, Iowa, they spent 2.5 years in Nuremberg, Germany. Lewis was a 4H leader and was president of the Linn-Mar FFA alumni. He was also a 35-year member of the Ottercreek Lions Club, and a member of the Toddville Free Methodist Church and the Toddville Legion. He enjoyed Square dancing and was a member and officer of the Rapid Eights Square Dancing Club. Lewis and Sharon enjoyed going to Texas during the winter months. He was a union electrician for Acme electric for 37 years with the 405 union. Lewis was preceded in death by his parents, losing his father when he was 17 years old. Lewis's family would like to thank the Hospice of Mercy for the wonderful care during his short illness, Also his church family at the Toddville Free Methodist Church for the prayers, support and supplying meals during this sad time. In lieu of flowers, donations to the Mercy Care Hospice, the Toddville Free Methodist Church or the Toddville Ottercreek Lions Club are welcome. Condolences may be directed to the family through murdochfuneralhome.com.

The family of Lewis Scherbaum created this Life Tributes page to make it easy to share your memories.

Send flowers to the Scherbaum family.