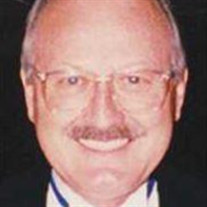 Dr. William Estill Rexroat Jr. of Cedar Rapids, Iowa, died on May 22, 2022, at age 87. Bill was born Feb. 14, 1935, in rural Webster City, Iowa, the son of William Sr. and Floy (Kent) Rexroat. After graduating from Webster City High School where he was a three-sport athlete, he farmed for a year with his father, began college, and enlisted in the U.S. Army. In 1960 he received his electrical engineering degree from Iowa State University and went to work for Collins Radio Company in Cedar Rapids where he documented the electronic equipment used on all Apollo space missions. In 1976 he received his second STEM degree, a Doctor of Chiropractic from Palmer College, and opened his practice in Cedar Rapids. He married Carol Miller in 1978 in Manchester, Iowa. As president of the Iowa Chiropractic Society in 1986-87, he played a role in gaining insurance coverage for chiropractic care in Iowa. He found great fulfillment in treating his patients and in retirement he retained an interest in science and holistic health. Bill saw the humor in situations and was always ready with a joke or a pun. He enjoyed golfing, fishing, and spending time with family, especially at their summer place in Delhi. He was a member of First Lutheran Church in Cedar Rapids and the Masonic Temple in Fairfax. Survivors include his wife of 43 years, Carol Rexroat; children, Ruthie (Nate) Dunn (children Rowan and Ty), Linda (Jeff) Gorkow (Alex and Alyssa), Dee Ann Rexroat (Imran Farooqi) (Rehanna), David (Kelly) Rexroat (Andrew and Sarah), Scott (Julie) Vyskocil (Katie), and John (Penny) Vyskocil (Jae and Charlie); as well as nieces and nephews. He was preceded in death by his parents and his sisters Maralyn and Elaine. There is a visitation at 2:30 p.m. and a service at 3:30 p.m. followed by a reception on Thursday, May 26, at Murdoch-Linwood Funeral Home, Cedar Rapids. Burial is at St. John’s Cemetery, Cedar Rapids. The family kindly requests that guests wear a mask and practice social distancing. A livestream of the service may be accessed on Bill’s Murdoch tribute page under “photos & videos.” Memories may be shared at murdochfuneralhome.com.

The family of Dr. William Estill Rexroat Jr. created this Life Tributes page to make it easy to share your memories.

Send flowers to the Rexroat family.